My husband and I arrive at Crabtree Apartments, Grand Turk, Turks and Caicos Islands, late Saturday afternoon and quickly settled in.  Very late in the afternoon I heard a quiet little squeaky yeow once or twice, I scanned the horizon thinking there was a cat near by, though we don’t often see them on Grand Turk.  A little later I heard it again, seeing nothing, I dismissed it as perhaps being a bird call of some kind.  We have cat birds at home and I thought perhaps they made their way here in the winter.
The next day I heard louder meowing several times and more frantic. 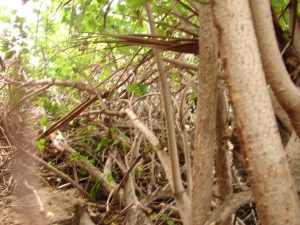 This time I was sure it was a young cat and thought perhaps it was a baby calling for it’s mother.  I looked around the brush in the lot next door and saw nothing, no baby, no mother.  I gave a meow call back to the cat and immediately it returned my call.  I searched under the brush pile, calling, it calling back.  For an hour or two I cleared brush away and trying to find where the call was coming from.  At times it came from under the brush and other times it seemed to come from an old rusty shipping container that had been consumed by the bushes and trees. 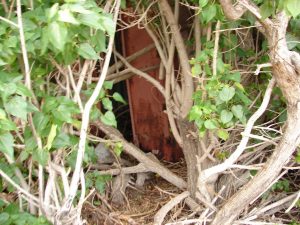 The calls, at times, seemed to come from within the container but I could see through cracks, the container was empty no cat, no kittens.  I climbed a tree to check the roof of the container – nothing.  The meowing moved about.  I was worried at this point that the cat was somehow trapped in some caverns under ground, buried under this pile of cut brush, bushes and sand.  I knew it had raided very hard a day or two before I arrived and thought it was possible the entrance had collapsed trapping the cat inside.  The meows were beginning to sound desperate.  I had no tools, there were prickers and huge cut branches in the pile tangled one upon the other.  I was diligently trying to pull out what I could and find an entrance of some sort.  But this was a task that needed tools and help.

I went to my Erika, who runs the Salt Raker Inn.  I knew she had a huge heart for the animals of the island.  She wasn’t free to assist me at the time but handed me 2 sets of pruning shears and promised she would be down after 6, it was now maybe 4 are dark would come soon.  Erika phoned Chris, at Grand Turk Divers, Chris was not free until after 6 but promised to stop by to see what she could do.
I arrived back to kitty and started cutting a way through the prickers, bushes and branch pile from 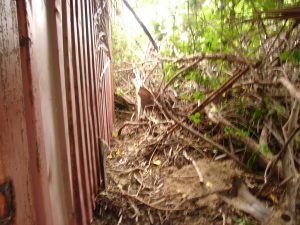 the beach, to make a path in from the other side.  I still couldn’t find the exact location of the cat she seemed to move from the container area to under the brush pile, confirming to me that she must be underneath it all.  It was now getting dark and kitty was calling less.  I was worried.  Chris arrived with shovel, rake and machete and began pulling at the side of the container to get in.  Once inside she began working on the floor boards.  I continued removing brush outside along with my husband.  Erika arrived, put on her rubber gloves and began pulling up floorboards too. Chris and Erika felt certain the cat was under the trailer container somewhere.  My husband was making holes outside under the container while Erika pulled up flooring and Chris dug holes inside.  It seemed the cat was directly underneath and calling to us but we just could not get at it.  We worked for another 1/2 an hour with flashlights, car head lights and determination but could not get at the cat.  Finally, discouraged and worried, we had to call it a day.  We put out food with the hope the cat would find a way out. 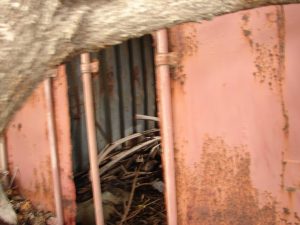 Not one of us slept well that night.  I woke about 4 AM and went out on the side porch.  I heard the cat call again.  I was encouraged she was still alive but it was still dark.  At daybreak I returned to the area and called the kitty.  She called back, what a relief!  I checked the container nothing, but I heard her call again from the brush pile and was sure we would have another day of trying to pin down where she was, wondering if she would make it through another day.  I knew she was a young cat and I didn’t know how long she had been there.  I called again and once again a call came back but this time it sounded so close, suddenly I spied it,  the kitten came closer under a dense thicket but as I gingerly stepped forward she immediately backed up.  I was ecstatic she was out and ok! Now I had to catch her and I needed help.

I phoned Erika and Chris.  Erika arrived first, together we tried gently to encourage the cat out.  Chris arrived with a pet crate and food.  After about 1/2 hour and no luck getting her, Chris departed for work,  Erika and I remained.  Erika decided to stay a bit longer and try to coax it into the crate with food.  She set up the crate near where the kitty was and patiently waited.  I went around the beach side thinking if it ran that way I may be able to get it.  Erika stayed at the crate.  When I crawled into the brush from the ocean side I saw Erika silently hovering over the crate and to my surprise, the kitten was half way inside, I didn’t dare move.  Sure enough, in the kitten went, Erika quickly closed the door and I ran around to see.  We were both so relieved.  The kitten was scared but it was so hungry it didn’t seem to mind devouring every bit of food. 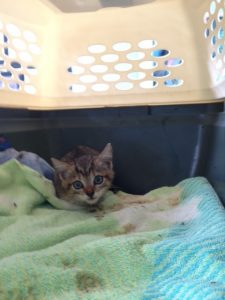 We were so thankful that we were able to rescue her.  She was a tiny little thing, maybe 5 weeks old.  Sweet and beautiful little tabby.

Erika made a call to Chris, she too was so relieved.  The day before, while we were searching Chris had told us her previous cat had passed and she could take this one in.  She showed us a picture of her cat, he was a beautiful tan tabby with a white chin.   Would you believe this tiny baby had almost the same coloring and markings of her previous cat.  Funny coincidence, or is it?
We now know the little kitten is a girl.  She is doing great and thanks to Chris, she has a great home!  Chris has a huge heart for the animals on the island.  She and a few others on the island help find strays new homes in the States and Canada.  If you are interested in helping out financially or adopting please contact either Potcake Place or Turks and Caicos Society for the Prevention of Cruelty to Animals .  Occasionally,when I am on the island,  I drop off a little dog food or little cash to Chris asking her to purchase some food the strays she cares for.  She feeds and cares for so many of the wonderful creatures on Grand Turk and I am sure every little bit helps.